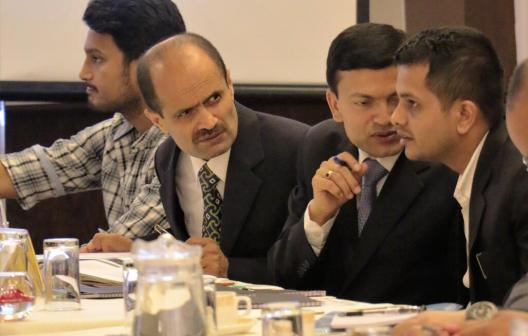 The 7th National Advisory Committee (NAC) meeting of LGCDP, Phase-II was held on 08 June 2016 under the chairpersonship of Mr. Mahendra Man Gurung, Secretary, Ministry of Federal affairs and Local Development (MoFALD). The meeting was attended by representatives from line ministries such as Ministry of Women, Children and Social Welfare, Ministry of Cooperatives and Poverty Alleviation. Likewise, joint secretaries of MoFALD, and other sector line ministries such as Financial Comptroller General’s Office (FCGO), Ministry of Finance, National Planning Commission, DOLIDAR and Local Bodies Associations’ representatives like ADDCN, NAVIN and MUAN were present in the meeting.

Similarly, the meeting was attended by Dr. Urs Herren, Ambassador from the Embassy of Switzerland who is also the nearly completing his tenure in Nepal along with other dignitaries and representatives from various development partners.

In his remarks, the Secretary noted that LGCDP has been the largest programme in the area of local governance reform and community development. Thus, moving forward in the changed context, the programme should be oriented towards capacitating local bodies to implement mandates of the constitution. It was underlined that community institutions such as the ward citizen forums (WCFs) and Citizen Awareness Centers (CACs) have been instrumental in empowering people at the grassroot level which has also been recognized in the Mid Term Review also, and that these community organization will be complimentary in the new system as well. In his final remark, the secretary acknowledged contribution of donors in making LGCDP a successful programme.

The NAC felicitated Dr. Urs Herren with a token of love and conveyed sincere appreciation for his impeccable commitment and support towards strengthening local governance in Nepal.

Development Partners (DPs) expressed that discussion held in the meeting will add more value and quality in the programme implementation in the days to come.

Some of the major policies endorsed by the NAC were as following: