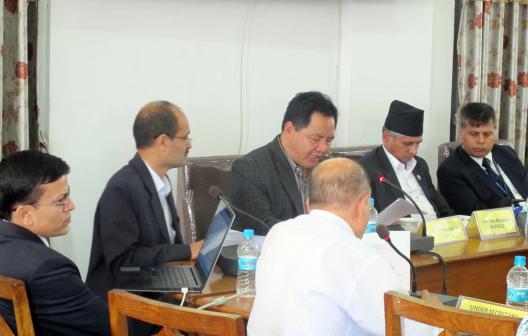 A consultation meeting was held between Ministry of Federal Affairs and Local Development with the development partners of the Local Governance and Community Development programme on 5th October 2016 in the presence of honourable Minister, Mr. Hit Raj Pandey, and honourable state minister, Mr. Shree Prasad Jawayegu and Mr. Kedar Bahadhur Adhikari, Secretary of MoFALD.

The objective of the meeting was to conduct an LGCDP DP's introductory programme. The meeting was organized at a crucial time when LGCDP II phase is going to be completed in July 2017 and designing process for the next phase is ongoing along with a year of transitional arrangement. Also, due to the fact the leaderships in MoFALD is new, it was a way of introducing and orienting about the efforts of the government towards implementation constitutional provisions while also garnering development partners views on continuing the support towards strengthening local governance. The meeting was also a way of highlighting government's main priorities.

The Honorable Minister expressed that federal implementation is priority of MoFALD. In this regard, the major achievements of the Ministry in implementation of constitutional provisions were highlighted: establishment of necessary structures and formation of local level restructuring commission, broad discussion with major political parties on boundaries and numbers that lead to District “ilaka” as one of the consideration for restructuring and therefore submitted recommendation to the Government as additional criteria for restructuring, holding of local election by April 2017 and tabling of bill for formation of various commissions.

Likewise, the state minister urged all development partners to continue cooperation and support the government of Nepal in implementation of the federal structures which is the main priority of the government.

The National Programme Director, Mr. Reshmi Raj Pandey highlighted on programme's major accomplishments and the areas that need to be internalized in local governments for sustainability. Likewise, the Secretary appreciated DPs continued support towards local governance and assured of Government of Nepal’s continuous cooperation. He highlighted major priorities of the government including local level restructuring and expressed government’s commitment to hold local election by April 2017. Similarly, the secretary made note of ministry’s ongoing efforts to implement constitutional provisions.

The meeting was attended by LGCDP’s major donor partners- UNDP, Embassy of UK, Norwegian Embassy, German Embassy, Indian Embassy, DFID, SDC, ADB, USAID, UNCDF, UN Women, UNFPA. Mr. Diepak Elmar, Head of Development Cooperation, SDC and Acting Incharge, Embassy of Switzerland on behalf of all DPs appreciated MoFALD’s effort in bringing together DPs and Government for the consultation programme. He remarked that it was a great time to be supporting the Government of Nepal during the historical transformation. He also urged the government to implement constitutional provisions, mainly the local level restructuring process and hold local election within the stipulated time. Meanwhile, he pledged for continued cooperation between the government and MoFALD.