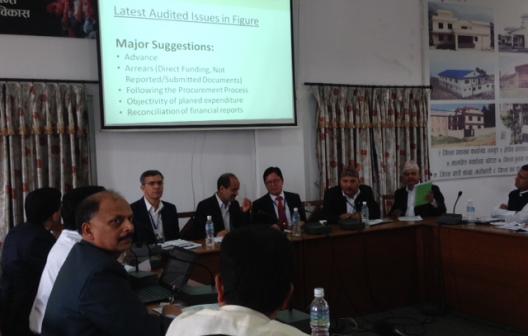 Fiduciary Risk Mitigation (FRM) meeting was held at the Ministry of Federal Affairs and Local Development (MoFALD) on 12th May 2016 under the chairpersonship of respected Secretary, Mr. Mahendra Man Gurung. The meeting was attended by representatives from various development partners, Joint secretaries and Under Secretaries, and other staffs from MoFALD alongside LGCDP Programme staffs. The meeting was facilitated by Mr. Reshmi Raj Pandey, Joint Secretary and National Programme Director of LGCDP-II.

Some of the key issues that were discussed included how to link PFM reform plans with FRRAP, deeper analysis on reasons behind audit arrears in the districts, quality assurance of local bodies audit reports and how to address conflict of interest.

In his closing remarks, respected Secretary thanked all the members presented in the meeting for their valuable input. He assured that FRRAP reform is a key priority of the Ministry. Nevertheless, there are areas of improvement, such as reducing audit arrears which the ministry acknowledges. For that, it is important to identify loopholes in the system and learn lesson from it. However, there should be practical approach to addressing issues depending on the target groups. It was also noted the need to strengthen monitoring mechanism to make users’ committee more accountable alongside capacity development and raising awareness of vulnerable groups.

Some of the key decisions of the meeting were to share and implement FRRAP document within a month, audit analysis of 14 districts, circulate audit report of last FY.