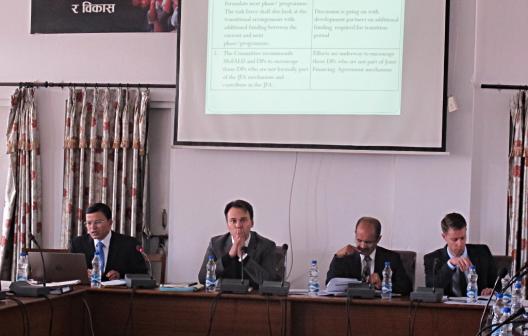 The 18th Sub National Advisory Committee (Sub NAC) meeting of LGCDP, Phase-II was held on 17th November 2016, under the chairpersonship of Mr. Reshmi Raj Pandey, Joint Secretary, Ministry of Federal affairs and Local Development (MoFALD) and National Programme Director LGCDP II. The DP chair and Co-Chair for the meeting were Mr. Diepak Elmar, Head of Development Cooperation, SDC and Mr. Gareth Rannaments, Governance Advisor, DFID respectively. Similarly, the meeting was attended by various representatives from development partners, Joint Secretaries and Under Secretaries, Section Officers, and staffs of LGCDP PCU. Mr. Chhabi Rijal, outgoing National Programme Manager (NPM) LGCDP appraised the committee on the progress of third quarter; some of the key agendas of the meeting were:

The DP chair acknowledged the progress made this fiscal year and on receiving the first draft of the concept note on the next sub national governance support programme, and urged DPs to provide critical comments. The DP chair on behalf of development partners also expressed concerned on exponential increase in the audit arrears and the incomplete UCPA data both of which are critical for programme intervention. The DP co-chair acknowledged the meaningful progress made where large number of citizens have been mobilized, and acknowledged it as a remarkable achievement of the programme. Other key discussion and decisions of the meeting were as follows:

The National Programme Director appreciates all feedbacks and active participation. He thanked development partners for their continued support and critical engagement in the design of future sub national governance programme. He appraised the board on ongoing efforts of MoFALD that the focus in on lawmaking process of the new federal structure, managing transition year of the programme and design of the new programme. He recognized DPs concerns and stated that resolving audit arrears will be given due focus.