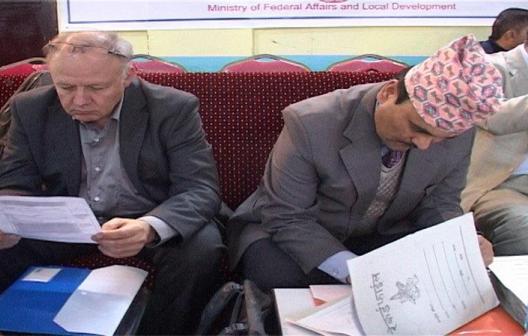 Dr. Som Lal Subedi, Secretary of Ministry of Federal Affairs and Local Development signed the performance contract with LDOs of Mid West and Far West region on February 12, 2015 in Nepalgunj. The contract signing ceremony was graced by high level dignitaries such as, H.E. Dr. Urs Herren, the Ambassador of Switzerland, H.E Kjell Tormod Petersen, the Ambassador of Norway to Nepal, and H.E, Ms Kirsten Gellan, the Ambassador of Denmark to Nepal. Similarly, the event was graced by other high level donor representatives, such as the UNDP Country Director, UNICEF Country Representative, DFID Team Leader, representative from European Commission and other development agencies.

At the outset of the performance contract signing ceremony, the Secretary of Ministry of Federal Affairs and Local Development highlighted on the concept and rationality of result based performance contract. Addressing the ceremony, the Secretary highlighted that Government of Nepal is committed to deliver prompt quality goods and services to the citizens.

Likewise, during the closing ceremony their excellencies ambassadors highly praised the initiation of MoFALD to strengthen local governance process at large, emphasizing that the result based performance system needs to be fully implemented and the performance be rated with the outcomes as committed. Many of them praised the initiation as a noble effort in the area of reforming local governance process with a larger importance.

The contract signing was followed by Joint field visit by the MoFALD officials, Ambassadors and Delegates. DPs organized by LGCDP Regional Coordination Unit Nepalgunj. The first group headed by the MoFALD Secretary visited Radhapur VDC and the second group was headed by MoFALD Joint Secretary Mr. Purna Chandra Bhattarai and visited Mahadevpuri VDC. Both groups were facilitated by the RCU professionals and District Governance Experts.

Ministry of Federal Affairs and Local Development has introduced performance based contract with Local Development Officers and Executive Officers of entire DDCs and Municipalities. The main aim of this initiation is to make local bodies more responsive and accountable to citizens and deliver quality services to citizens. This initiation aims to concentrate on the efforts of LB’s chief towards making Local bodies as a lead development agency with meaningful participation of citizen and strengthen local governance process at local level.