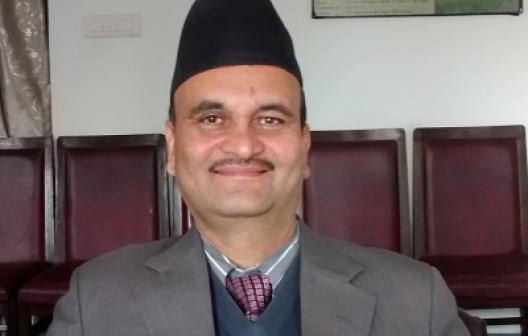 Having written a numbers of books on fiscal federalism and decentralization, Dr. SOM LAL SUBEDI, secretary at Ministry of Federal Affairs and Local Development, has earned a name for himself in his area of expertise. Secretary Subedi spoke to NEW SPOTLIGHT on various issues regarding the implementation of LGCDP. Excerpts:

In the absence of elected representatives, how effective will Local Governance and Community Development Program (Phase II) be to make local bodies more accountable?

We have been implementing internationally practiced local governance reform measures through LGCDP II by incorporating many good practices. Coincidently, the first phase was implemented when I was a joint secretary at the Ministry. I was part of the project design. I was the first National Program Manager of LGCDP I. We have incorporated all the components to maintain downward accountability to make local bodies more effective, transparent and accountable even in the absence of elected representatives. We have designed measures to make it accountable. This includes demand side strengthening components of social mobilization and capacity enhancement programs. In the supply side, the government provides certain subsidy and donors pool funds to carry out various programs. In the first phase, there was a huge amount of resources and we provided the money to local bodies to implement the projects as decided by user groups.

How do you look at the resources now?

Although the second phase is a continuation of the first phase, the resources in LGCDP II are less than that of the first. I am not involved in designing of second phase. However, LGDCP is going on perfectly well.

How do you plan to implement this phase?

We have created over 40,000 community based institutions like ward citizen forums and citizen awareness centers. The Ministry has organized meetings with local community people and ambassadors representing the country’s development partners and heads of international development organizations. As a secretary of Ministry of Federal Affairs and Local Development, I signed the performance contract with LDOs of Mid West and Far West regions in front of high level dignitaries, such as Dr. Urs Herren, the Ambassador of Switzerland, Kjell Tormod Petersen, the Ambassador of Norway to Nepal, and Kirsten Gellan, the Ambassador of Denmark to Nepal. High level donor representatives including UNDP Country Director, UNICEF Country Representative, DFID Team Leader, and representatives from European Commission and other development agencies were also present there.

What have you achieved with the implementation of LGCDP?

With the implementation of LGCDP, we are able to retain the enthusiasm in the community. As legally elected leadership and institutions are lacking, the local government has not been functioning at the level we have desired. Although there are no elected representatives, there are now over one million community workers involved in the local bodies which is almost five times higher than estimated 200,000 plus elected representatives in District Development Committees DDC, Municipalities and Village Development Committees. Even in the absence of local election, the centrally deputed bureaucrats have been working quite effectively with local communities in carrying out development activities. This is a very positive thing. This is a positive part of LGCDP.

What is LGCDP all about?

LGCDP is a framework of reform as it involves monitoring, financial risk management, capacity building and financial system, social mobilization, and downward accountability. It also involves total reform in local government. At a time when there is no institution which allocates inclusive budget, our social mobilsation guideline has made it mandatory for all local bodies to allocate 35 percent capital investment to indigenous communities, Madheshis, Women and children. We are now articulating voices of voiceless through the local bodies. We are also making efforts to address the demands of concerned people as much as possible. The indicators developed under the LGCDP make local bodies efficient and best.

How do you distribute the budget?

We distribute the budget on the basis of criteria developed through the mobilization process. We have various indicators to evaluate the performance of the local bodies on the basis of their works.

What are the program components included under it?

The program components include the Governance Reform under policy and service delivery and capacity development under supply. On supply side the program focuses on Service Delivery and Capacity Development, and finally the objective is to ensure citizen empowerment. Under the local development, works are carried out for socio economic and infrastructure development.

What is the major objective?

The objective of the program is to contribute towards poverty reduction through better local governance and community development. The purpose is to improve local governance for effective service delivery and citizen empowerment.

What do you expect from LGCDP?

What changes have you seen after implementation of LGCDP II?

What I have seen is that accountability mechanisms for local governance are in place. Along with this, local bodies’ access to resources has increased. There is also improvement in public financial management system. Institutional and human resource capacities of local bodies and central agencies involved in local governance have strengthened.

Do you see any improvement in services?

What one can see is access to and quality of local infrastructure and other socio-economic services administered by LBs are better. LGCDP also strengthened integrated planning, budgeting, monitoring and evaluation and coordination amongst local governance actors.  It also refined policy on local governance and improved inter-agency cooperation and policies developed for devolution and federalism.

How about livelihood components?

LGCDP also includes livelihood programs. The Ministry has allocated certain amount of money in each district under the program. There is a wide coverage but we are unable to allocate the budget as demanded by them. We have been supporting them in preparing annual plan on livelihood. If elected leaders of the future take the measures as campaign, LGCDP will also look at the livelihood issue. If the coming elected leadership use reform measures as a campaign, Nepal’s local government will be the best model in future. However, it is yet to know what the role of local bodies will be in the context of federal structure.  I have a recently published document paper on listing of what the districts, municipalities and village development committees will be like.  I have already forwarded this document to various institutions, including Constituent Assembly, Prime Minister’s Office, National Planning Commission and Ministry of Urban Development. We are lobbying for listing.

There is much confusion about the ownership of rural roads. How will it affect the recent agreement with Ministry of Physical Planning and Transport?

We have recently taken a joint decision with Ministry of Physical Planning and Transport. Under the agreement District Development Committee will construct the bridges on the local road network. This issue remains a major obstacle in the local road networking. Local bodies have developed 52,000 kilometers of track and we will now start soon the construction of bridges over the track opened DDC. I have already directed DOLIDAR to prepare inventory and SWAP for the bridge construction. After this, the infrastructure needs of local bodies will be identified. It will bring a major change in our road connectivity. It will also help to connect the newly announced municipalities with rest of the country. The Ministry has also approved working plan to built 2500 suspension bridges throughout the country in five years. In this way, the ministry has prepared the plan at the policy level on transparency and accountability and infrastructure. We are making efforts to move ahead integrating transparency and accountability.

How much role LGCDP has to make local body lively and functional even in the absence of elected representatives?

Due to reform measures proposed by LGDCP II, the whole local bodies have developed certain inbuilt capacity. As LGDCP is itself a program, we have internalized the spirit of LGDCP at local level. Some of the important components include social audit, public audit, resource mobilization framework, model of social mobilization.

What do you expect from LGCDP at the end?

By July 2017, as envisaged by the project, LGCDP will bring drastic changes in the functioning and overall pattern of local governance by empowering citizens and community organizations, encouraging them to actively participate and assert their rights in local governance. Among others, access to and quality of local infrastructure and other socio-economic services administered by local bodies will improve.

This Interview is taken from Spotlight Magazine. Click here to read from original source.