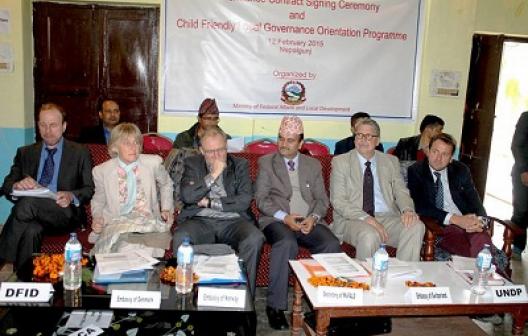 "LGCDP: A Mechanism To Count On"

In about fourteen years since the dissolution of the local bodies, Nepal has held two national elections for the Constituent Assembly. However, the issue of holding the local elections is on nobody’s agenda. As institutions directly attached with the day to day life of the people, local bodies cannot remain as they are: functioning under civil servants to deliver on the demands of the people. The implementation of Local Governance and Community Development Program (LGCDP), a model and unique program, has come to be handy in this respect, making the local bodies accountable and participatory

People living in Papung Village Development Committee of Taplejung district have reasons to rejoice as they have the mechanism to get involved in decision making and in making the local bodies accountable.

Even after the termination of the tenure of the elected representatives of the local bodies in 2001, the villagers decided their own affairs through Ward Citizenship Forum and Citizens Awareness Centers.

For a couple of years following the dissolution of the elected bodies, they did not get the basic service delivery from the VDC. However, the situation changed following the implementation of the Local Governance and Community Development Program (LGCDP).

Under the Social Mobilization Guidelines 2071, there is a provision for formation of Ward Citizenship Forum, Citizenship Awareness Center and Village Social Mobilization Coordination Committee at the village level. Even at the municipality, there are the Ward Citizens Forum and Citizens Awareness Center. Papung is not the only VDC to have these kinds of structures. Under this provision, 737,100 are mobilized in the country.

In the present context, it is natural for everybody to pose a question about how the local bodies function as accountable and participatory in the absence of elected representatives. With the implementation of the LGCDP, everything has changed now.

Along with making the local bodies accountable, Ward Citizenship Forum and  Citizen Awareness Center are also involved in uplifting the livelihood of the people, particularly those marginalized and backward communities of Nepal. From the construction of road, small irrigation, school building, community work, local livelihood, the people have been actively involved through these institutions.

People’s contribution is a prerequisite for any successful project. Maya Pun is a woman member of a ward citizen forum of Machhapuchree, a remote Village Development Committee (VDC) in Kaski. She has been living with her one son, two daughters and husband at Saripakha village of Ward No. 4.

After participating in Ward Citizen Forum, she has been able to communicate with local planners about the needs in the community. She placed emphasis on agricultural activity in ward level planning workshop in 2070.

Like Pun, Dhan Bahadur Rai is from Dharan Municipality Ward No. 17 and coordinator of Pragati Nagarik Sachetena Kendra. Before receiving the loan for income generation schemes from his CAC, he was a simple carpenter and his income was not enough to address the needs of the family. As a result his family members were compelled to face the monetary problems in their day to day life and were pushed to live under the trap of social and economical deprivation. LGCDP supported Rs 100,000.00 as revolving fund among the CAC members for livelihood improvement plan in 2069 through Dharan municipality.

LGDCP has also made a great contribution in the construction sector. "The people at Histan VDC in Myagdi district are the example to justify this. They constructed a modern school building with the support of district development committee and department of education. The total cost of the building was 7.5 million Nepalese rupees, in which 3.45 million cash-contribution was made by the local people of Histan VDC. "

The project set up an example that if people’s needs and will are considered in development work, the people themselves will be inspired for qualitative and noble work.

“One of the important aspects of the project is the downward accountability. Public auditing and proper documentation to maintain project book is given a high priority for the optimum use of the resources available from different sectors and also to increase the public trust towards community initiated work," said Dr. Som Lal Subedi, secretary at the Ministry.

Executed by the Ministry of Federal Affairs and Local Development with technical and financial assistance of development partners, this is a national program framework for improvement in local governance system and community development.

The program has been designed as a framework program with four outcome and nine output areas, contributing to its purpose and overarching goal. Citizens and communities hold their local governance actors accountable. Local bodies are more responsive to citizen’s demands.

With an aim to provide all citizens with efficient and effective local services, the project has been implemented throughout the country. With the implementation of a series of measures, the program aims to strengthen policy and institutional framework for devolution, sub-national governance and local service delivery.

“LGCDP aims to strengthen both the demand and supply sides of local governance. The program envisages empowering citizens to engage actively with local governments and increasing the capacity of local governments to manage resources and deliver basic services in an inclusive and equitable manner besides strengthening institutional framework for decentralization, devolution and community development,” said Pandey.

Along with other aims, the program is to contribute towards poverty reduction through better local governance and community development aligned with the national goals of government’s plans. This will contribute either directly or indirectly to their realization by empowering citizens and responding to their priority needs, while at the same time strengthening decentralized local governance systems, community development, infrastructure development, economic development and integrated service delivery.

LGCDP II provides an overall framework for strengthening decentralization, devolution and improved local governance system for the effective delivery of basic services and the empowerment of citizens, especially women, children and Disadvantaged Groups (DAGs) and their institutions.

At a time when there is uncertainty over the elections for local bodies, implementation of LGCDP II as a program has filled the vacuum of elected representatives through community mobilization.

This article is taken from Spotlight magazine. Click here to read from original source