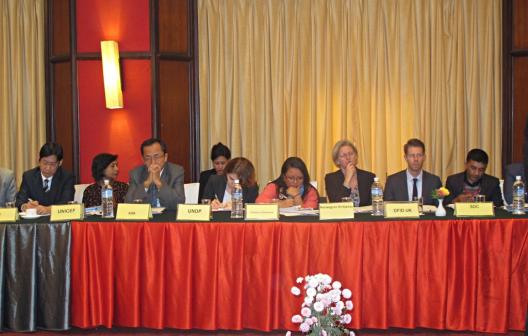 Likewise, the meeting was attended by representatives from line ministries such as Ministry of Women, Children and Social Welfare, Ministry of Cooperatives and Poverty Alleviation. Likewise, Joint Secretaries of MoFALD, and other sector line ministries such as Financial Comptroller General’s Office (FCGO), Ministry of Finance, National Planning Commission, DOLIDAR and Local Bodies Associations’ representatives like ADDCN, NAVIN and MUAN were present in the meeting. Similarly, high level dignitaries and representatives from various development partners were in attendance as well.

The Secretary in his opening remarks acknowledged LGCDP’s achievements and its contribution in institutionalizing GESI and CFLG at local level. In general, he remarked that MoFALD has crucial role to play in supporting functionaries at province and local level. It is a historic opportunity for poverty reduction. With regards to the programme, he welcomed the almost completion of the concept note of the new Sub National Local Governance Programme and urged to finalize the transitional management plan of the programme as well.

Likewise, the DP chair in his opening remarks congratulated LGCDP for the programme’s achievements and for successfully conducting field visits on GESI, PFM and the recent Joint Field Visit. He stated that it allowed to understand local challenges on the ground. He requested GoN to take concrete steps to manage the Federal transition. DPs are eager to support through this programme and also through other means such as districts. He mentioned that there is considerable amount of uncertainty at the local level regarding the transition and how the service delivery will be affected. These confusions will increase as the process of restructuring will move forward. No clear instructions and concrete decisions will impact the works at the local level.

Furthermore, he urged to broaden the ToR of the joint task force for the transitional management plan. The concept note provides a good basis to start discussion and DP’s support in the future governance programme, in line with the commitment made in Dhulikhel. It is critical to reflect on issues and lessons’ learnt. He also expressed some concerns on outstanding audit arrears, completion of UCPA data, managing fiduciary risks.

In the closing remarks, the DP Co-chair acknowledged that in absence of local elected local bodies, the programme has sustained local accountability, reached millions of people through community institutions. The sentiments from the ground is that despite the challenges, the poorest members of the communities are prepared to engage in the state restructuring programme. That DFID has been proud to support the programme.

Some of the major policies endorsed by the NAC were as following: